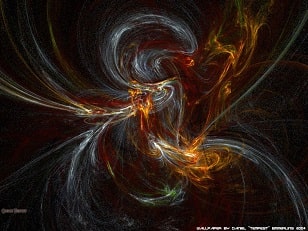 While the Homeric cosmogony is confined merely to the mention of ‘‘Oceanus, the father of the gods, and Tethys, their mother’’ (Iliad 14:201), Hesiod presents an elaborate account that may be summarized as follows: First came Chaos, and next Earth, then Tartarus, and Eros. From Chaos came Erebus and Night, and of Night were born Aether and Day. Earth bore Heaven and the great sea, Pontus. Then, impelled by Eros, she united at one time with Heaven, at another with the sea, giving birth thus to different lines and generations of divine beings. Hesiod relates their theogonic conflicts in detail (Theog. 116 to the end). According to Pherecydes of Syros ( c. 550 B.C.), the three original gods, Zeus, Chronos, and Chthonius, always existed; the other gods descended from these three in five successive waves. Zeus, transforming himself into Eros, created the Earth and the Ocean, despite the opposition of the Titan Ophioneus. The most original contribution of the cosmogonic myths of Orphism is their account of the origin of man. He was created from the ashes of the Titans who were destroyed by the thunderbolts of Zeus after they had devoured the infant Dionysos. Man, accordingly, bears within him the germs of evil as well as particles of divinity. The Cosmic Egg (mentioned by Epimenides of Crete, seventh century B.C.) is also an Orphic myth. From the Egg came Heaven and Earth, following the intervention of Phanes, the Orphic pendent of Hesiod’s Eros. The Ionian philosophers, in seeking to give a scientific explanation of the world’s origin, replaced mythical forces by original physical principles (ßrcaà), but did not thereby escape the influence of the old cosmogonies. Later, despite the attractive Platonic theory of the Demiurge responsible for transforming Chaos into Kosmos, the image of the scientific world, as it was projected by Aristotle and completed by Ptolemy the Geographer, imposed itself to such a degree that neither the conceptions of popular belief (see, e.g., Ovid’s Metam 1:5–451) nor the mythical cosmogonies of the Hermetic writings (the speculations of the Poimandres, especially) and of Mithraism could prevail.